What is the meaning of MLM?

The MLM meaning is Multi Level Marketing and unless you live under a rock, you are probably being exposed to it in loads of ways, you just might not realise that is what it is. In short it is nothing more than a type of pyramid scheme, just with a different name. The difference between this and the traditional pyramid scheme model is that a product or service is involved, instead of just being about a membership, investments or recruitment fees. The people at the top receive commissions and income for anyone joining or making sales below them, so unless you manage to recruit a massive amount of people below you, you are unlikely to make any real money out of it, particularly with the amount of programmes that involve a joining fee or kit purchase up front. The more people you recruit, the higher commission rate you can earn, and the more money you can earn.

The problem with pyramid and MLM schemes is that they are not sustainable. Only the people at the very top, and who get involved early will actually make money. The more people who join, the more people below them will need to join to ensure that everyone makes their money, but eventually they will run out of a pool of recruits and most people will make a loss.

Why do they have a bad name?

The problem with MLM programmes is that so many of them have allowed people to get burnt because the vast amount of people end up spending more than they can ever make. A lot of the ads on social media prey on the kinds of people who could do with the extra cash (like stay at home mums or single parents). Preying on this vulnerability is in my opinion inexcusable.

They are actively promoted, particularly on social media platforms, as quick and easy money making opportunities, and yet that really couldn’t be further from the truth. Like most things in life – if it seems too good to be true, it usually is.

The first one is directly telling you what you would be signing up for, but they are acting as though this is a limited time offer and how joining now will benefit you so that you don’t miss out and will  get a half price joining fee. They use this “urgency” to rush people into signing up.

This second one is about as vague as it can be. They are selling this great opportunity on the fact that you will be working with a great team, you can be a hairdresser, lawyer, stay at home mum etc. There is no way this is not something which is too good to be true – and I would recommend you run fast in the other direction before replying to any such ads. 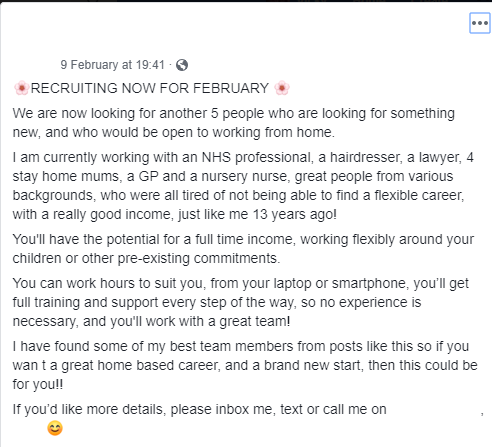 What about well known companies?

Even well known companies like Avon, The Body Shop and Ann Summers (in fact anything that refers to it’s “recruits” as distributors, promoters or consultants etc) are some form of MLM.

Ann Summers parties have been really popular in the past, and have been a fun way of having a girls night in, with the representative going to the host’s home or other venue, and running adult themed party games and encouraging the guests to place an order, with the host earning a discount on their order. Programmes where you can run such events can be good ways of getting groups together to get bigger orders placed, but they by no means guarantee you success.

New brands and companies are cropping up all the time, and some of these are making the MLM name even worse than it was. In particular Tropic has become really popular, and I am regularly seeing friends and acquaintances on Facebook becoming a rep. Tropic do sell themselves as different to other MLM programmes, and in fact call themselves a “direct selling” company rather than MLM, but ultimately, the business model is the same, people earn commissions from recruiting other people and making those sales.

Unfortunately, MLM types programmes are becoming more and more popular, particularly in times when people have a lot of financial issues and worries. People are sold false promises, and have their hopes played on.

Years ago I joined Stampin Up as I was really into crafts and things like that. It was a set price and you could choose up to a certain value of products for a reduced price and as there was more than that amount of stuff in the catalogue that I wanted, I joined up. I had no real intention of making money from it, apart from maybe sharing a catalogue with a friend or two, but once I joined I saw that there was so much more to it. You weren’t forced to make sales but the person who signed you up would encourage you to do so. Also as a “demonstrator” you could aim for rewards and even holidays for the top sales person. You also could earn more benefits and rewards if you recruited other people. I didn’t want to become a pushy sales person, and I wasn’t interested in signing other people up, so I just kept my kit and let me “membership” lapse.

What should I know?

Clare from My Money Cottage tried out being an Avon rep and has written about it for her site. She explains it far better than I ever could – after all, she has tried it, but here are my key takeaways from her experience and those of other people who have tried MLM.

It is incredibly unlikely you will make any decent money (if any) from any MLM programme – no matter what you are promised on sign up. They are advertised to sound amazing, quick and easy, but there are far better ways of making money! Use your discretion and perhaps look for a side hustle which relies less on the recruiting of other people or promises which seem too good to be true.

As a side note, popular website Mumsnet has even banned MLM programmes from advertising on the site, and that says it all. 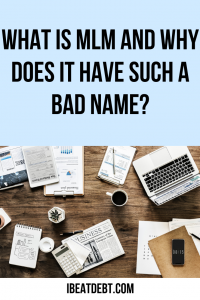 Diversifying your investment portfolio is a great financial plan. This risk management strategy can help to make a portfolio stable…

While it is always fun to make New Year's Resolutions, this annual rite is even more satisfying when we do…

Whatever personal situation you may have found yourself in at the beginning of the pandemic (living with house mates, single…

Are you having problems with budgeting your finances? Sure, there are plenty of money management applications out there, but most…

3 Replies to “What is the meaning of MLM and why is it so bad?”