Firstly, I want to go on record and say that anyone who gets the conversations about money going and encourages people to face their financial situation cannot be all bad, however I do have major concerns about some of the teachings and quotes from the American Christian financial guru Dave Ramsey. He also happens to be one of the biggest debt and money writers and speakers in the US (and possibly the world now). Christian or otherwise, he has a big following and I do believe he has some useful and practical lessons that can be learnt from some of his teachings. His most popular and well known programmes or ideas are the debt snowball and Dave Ramsey’s Baby Steps.

Here’s an example of a tweet that I do agree with, to show that this isn’t just a negative rant.

Sleeping on a big purchase is something I actively advocate and would recommend to anyone. Impulse purchasing can lead to some of the biggest financial regrets that I hear about.

On the other hand though, I also feel that he spouts a lot of rubbish, and this morning was unfortunately one of those times. It was a tweet that wound me up so much, that I couldn’t ignore it. Looking at the responses, it would appear that a lot of other people feel the same about his comments, meaning he is either incredibly misguided, or he is in fact posting stuff just to get a reaction.

Just because you are paying off debt doesn’t mean you shouldn’t be allowed to live! Cutting yourself off from friends and family and not enjoying yourself is only going to make the whole debt clear off process more miserable and you are less likely to succeed. It’s hard enough as it is. It really isn’t sustainable living in the way he promotes! In my opinion (and I am not a qualified debt or financial advisor) as long as you are budgeting for these types of expenses, and not relying on them, then I (and the vast majority of other finance bloggers) would rather you budgeted the occasional treat, rather than scrimped and saved every penny and were miserable. You can also use things such as O2 Priority or Meerkat Meals and Movies to save extra money and reduce the costs, but even if you are going out (and not even necessarily for a special occasion) and no discounts are available, I’d rather you did that than made yourself more miserable. Debt and mental health are closely linked as it is and whilst yes, not spending a penny will be the quickest way of clearning off any debt, it does not take into consideration the impact on your mental health and focus about clearing your debts.

I’ve written before about how the shame of debt leads people to not talk about their problems and to not seek help. Part of why I set up this site is to get the conversations about money going. I want people to see that there is no shame in it, after all we all make mistakes, and some people are in debt through no fault of their own. This tweet in my opinion falls under the category of debt shaming. I believe it could be interpreted as people in debt shouldn’t be allowed to live or enjoy themselves. It’s just not a healthy or helpful approach.

One of my favourite replies to his tweet was this one:

The writer of the tweet has summed up my response brilliantly. If you aren’t allowed to eat out, where’s the line? Stop sleeping so you can work more? They have of course taken it too far, but their point is well made.

Another response that resonated with me is this one:

I have always always said that if you are in debt you shouldn’t be paying for debt management or counselling. There are enough free debt services and charities that can help you, without costing you more money and risking getting you more in debt. Dave Ramsey sells a wide range of products, from books, ebooks, courses, envelopes (yes really) and a “Financial Peace University” enrolment. People in debt SHOULD NOT BE PAYING FOR THIS STUFF! He is happy to flog you his stuff though, but he doesn’t want you to eat out! What’s the difference?

I have to admit I’ve never read any of his books or done his online university, but I would imagine that a lot of the teaching and principles are pretty the kind of things you would be taught on any free money management course, on a financial website or in debt management. I went through the CAP money course, and then became a CAP client for my debt management and I learnt a lot of amazing stuff about money – and it cost me not a single penny! The Money Saving Expert Martin Lewis has recently partnered with the Open University to launch his free Financial Academy where you can learn about a variety of different topics from making good spending decisions, budgeting, different types of borrowing money including mortgages, savings and investments right the way through to planning for retirement. This also costs NOT A SINGLE PENNY!

In my experience, the person who judges the person in debt the most, is themselves. They feel like a failure, like they have let themselves and their loved ones down. They often end up embarrassed and ashamed. I know that’s how I felt. It’s part of why I didn’t want to tell anyone else about the situation I found myself in. I carried this on my own for quite a while before I faced my problems. I wish I had not left it so long, and I wish I knew back then that no-one I’ve ever spoken to about my debt has judged me. In fact, quite the opposite. The more I talk about money, the more I realise what a problem money and debt is. So many people have also had financial concerns and debt, but I never knew about it- because no-one ever speaks about it.

Whether you’ve ever had money problems or not – don’t judge someone for their financial situation. You don’t know what they’ve gone through to get where they are now. Perhaps they did make some silly mistakes, but perhaps they have ended up in a position through no fault of their own. Either way – judging or shaming them will not help the situation. Also, throwing our generalised and blanket statements such as don’t eat out if you are in debt is completely useless (it would also collapse the economy but that’s a whole other blog post)!

This post is not meant to be a Dave Ramsey slagging match, he posts some good financial content, and has some free resources on his website, however, more and more of what I see of his writing is in my opinion unhelpful and unnecessary. It’s why I would encourage you to use wisdom and discernment when seeing or following his “teachings!”

I also want to point out that I have deliberately not linked to any of his content or products from this post, as I just don’t feel comfortable doing so. You can clearly Google his stuff yourself should you want to, but I can recommend far better, and cheaper services than him (see above link to the free financial education course), and from people who don’t tweet out unhelpful things which are only going to contribute to the pressure and shame people are already piling on themselves. I’ll leave you with this other particularly unhelpful tweet from a few days previous. I get where he is coming from (being debt free – including having no mortgage – would be amazing) but this tweet is equally just as ridiculous!

In short – don’t get financial advice from a millionaire! 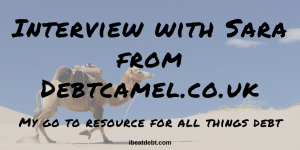 What is Debt Camel? I started I Beat Debt to share my story of getting through the debt management process…