I know this might not make any difference – but I need to tell you how your behaviour and irresponsible lending makes me feel. We started off on such a strong footing – everything was great. Having a credit card made me feel like a grown up. It was like a rite of passage. I know you never made me spend the money, but you also didn’t stop me from getting more credit!

You never stopped and asked questions when I maxed out one card. You didn’t ask why I was doing a 0% balance transfer from one card to another, and you never asked how I was going to pay off my new (usually larger) balance that you seemed more than happy to give me. I know, I was an adult, I should have known better, but I didn’t. They don’t teach this stuff at school – or they didn’t when I was there. You are the finance industry,  you are the experts so I relied on you to know what you were doing and not take advantage.  I didn’t realise that you were participating in the horrible practice of irresponsible lending.

Once I finally realised the scope of my problem – I was in over £8,000 of credit card debt and earning an amount that meant it was almost impossible to pay it off. I was just about making the minimum payments to avoid interest but I was never clearing it.

Christians Against Poverty intervened and you and I went on a break whilst I sorted myself out. Thanks to them and some crazy circumstances which I never could have forseen I managed to get out of debt within a year. This was even though your irresponsible lending had contributed to me getting to that position in the first place!

The damage was done though

My credit was destroyed – or so it felt. I couldn’t even get a current account. I didn’t want an overdraft, just an account for my own money, but all I could get was a basic account with a cash card. I couldn’t get a sofa from a well known provider on credit and I felt worthless and a complete let down to my family. I’m not blaming you solely for this, like I said, I spent the money – you didn’t put a gun to my head – but you did have a big part in it. I hope you can see this.

Years passed by, and I rebuilt everything, from the ground up. I was earning more money, I felt like I knew what I was doing, and wasn’t scared of opening my post any more.

After much time and reflection, I decide to get a credit card again. I knew I would have to get one for people with poor credit – but to make my life easier when travelling – when hotels like to have a card on file – I thought it would be the best option. I set up to pay it off in full every month by direct debit as I’d usually put a tank or two of petrol on it a month as well. Debt put me through hell and I was not going there again.

We originally started having problems years ago, and credit where it’s due (pun intended) I know you and the industry have been through big changes since then. I thought that maybe things had changed, but in terms of credit cards, I’m not sure the change is enough. I thought maybe you were better than you were, but I need to tell you that you aren’t. What upsets me most now is the willy nilly (frankly there is no better term) approach to unsolicited credit limit increases.

Why are you actively giving unsolicited credit limit increases to such a high percentage of people who have credit cards? I was even offered credit limit increases on my card for people with poor credit. Actually – offered is the wrong word. I was GIVEN the increases. I had to make a call every time to opt out every, single time. I refused one, then the next time you increased it to what you would have increased it to if I’d increased it in between (I started off with £250, phoned up to opt out of the £500 one, and then the next one I was given was £1000!) How is that responsible lending? Irresponsible lending more like it! I mean I know the Financial Conduct Authority (FCA)  has had voluntary remedies put in place, but it’s not enough:

“In the light of our findings, CP17/10 explained that we had engaged with the credit card industry about our concerns relating to consumer control and the risk of detriment for customers in financial difficulties. We also set out the voluntary remedies the industry are adopting, which we believe achieve our objectives in an effective and timely manner, to give customers greater control over their credit limit, including that:
• existing customers will have the ability to tell their credit card firm that they want to explicitly accept any offer of a credit limit increase (opt-in), rather than have firms automatically increasing it if they do not reject the offer (opt-out)
• new customers will be given the choice of how increases will be offered, while existing customers will be given a more straightforward means of declining an increase and more choice as to how increases will be offered in future
• all customers will be made aware of their existing right to choose not to receive offers of credit limit increases
• unsolicited offers of a credit limit increase will be presented neutrally, rather than as a reward

Since we published CP17/10, the industry has agreed that customers meeting our definition of persistent debt for a period of 12 months will not receive offers of credit limit increases. This would be instead of the previously published restriction in relation to making minimum repayments.”

It’s not just me

It’s not an issue that affects just people with poor credit though. I know many people who have excellent credit, but have completely unaffordable credit limits. One person I spoke to has a total credit limit of just over £26,000 across just a few credit cards and one store card. As they have always had good credit, each account was usually opened with a reasonably sized balance, but all subsequent increases have been unsolicited. They admitted to me that the figure was slightly higher than their net annual salary and that they would be in financial trouble if they got close to the limit of even one of the cards and one has a limit of over £7000 alone. This is irresponsible lending at its finest!

Now the vast majority of these people with good credit ratings (including those I spoke to) are sensible and don’t use them to anywhere near the limit they’ve been given, but it’s hard. It is temptation after all as we live in a society where nice things and nice holidays are looked upon positively and enviously. Also, there no way of knowing what’s around the corner, or what financial difficulties that might arise down the line that might mean they need to use these huge credit limits and end up in even more trouble. I also know of at least one person who didn’t even get the letter about the credit limit increase as it was lost in the post, and didn’t know they had it until they checked their balance. Luckily they hadn’t overspent – but some people don’t monitor their spending quite so closely.

The FCA also state that:

Why do unsolicited credit limit increases even exist? No matter who the person is or what their credit history is, there is no need for them. If someone needs an increased limit for an upcoming purchase or other reason, they should have come to you and ask for one.

I spoke to Sara from Debt Camel. She agrees with me and says:

“Firms make huge amounts of money out of people with large balances. I don’t think they should be allowed to offer larger limits, they should have to wait until a customer requests one. It’s hard for a customer to make a good decision here when offered a limit increase. Many think it might be useful sometime to have the larger limit so say yes, then if their finances do get difficult they run up a large and unaffordable balance.” 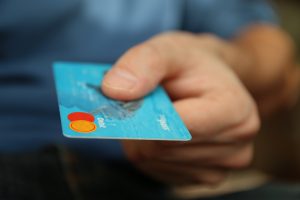 End of! The only way of proving to me and the rest of the world that the finance industry isn’t just being greedy and actually cares about its customers is to stop this practice. You say these increases “are for the benefit of your customers” but we all know that’s not the case. The FCA need to take onboard this feedback and put their foot down. Things like this shouldn’t be voluntary – they should be compulsory and far more strict.

If you agree with me, and are a British Citizen or UK resident – please pop on over to https://petition.parliament.uk/petitions/226160 and sign my petition. 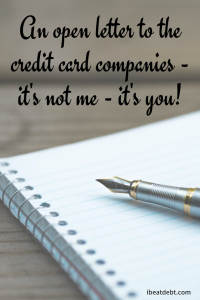 2 Replies to “An open letter to credit card companies – you need to stop irresponsible lending!”