There are no two ways about it – being environmentally friendly can bring about a cost, and only you can decide how much you want to or can afford to pay for things. There are many reasons we choose a cheaper or easier option and I am more than guilty of this. Whether it’s picking the cheapest energy supplier, rather than a slightly more expensive but renewable energy company, or only using a plastic bottle once before disposing of it out of convenience. We all do it! There are however many ways of being environmentally friendly which won’t break the bank and involve little or no effort. There are actually loads of advantages of going green.

I am most definitely not an “eco-warrior” and to be honest, environmental issues have never been a big priority for me, but all that changed a few months ago. One day, one of my cats didn’t want to eat breakfast – which if you know him, you will know is super unusual. I was so worried about him I even came home from work at lunch to check up on him. Obviously, that day he had bounced right back and I felt a bit stupid. Just a couple of weeks later, we had another day of him not eating his breakfast and I noticed that a few pools of vomit had appeared in the kitchen overnight. I got straight on to the vet and got him seen that day. It was a Saturday, and I took him in just after lunch, but after a lengthy (ish) examination, the vet sent us straight to the emergency out of hours vet branch 10 miles away.

We headed straight there and after being examined again, I was told there was definitely something wrong with his stomach, but that he was very sick  and dehydrated. He would need sedating and a scan, as well as fluids by a drip. Depending on the results, surgery was looking very possible. I knew he was in the best hands but I was so worried. A little while later they called and said nothing showed up on the scan, and they would need to operate. A couple of hours later the vet called and told me that he had intussusception (no I had never heard of it before either) which is where the intestine folds in on itself – almost like a telescope effect. It had been caused by him eating a bit of plastic though. He had the plastic and part of his intestine removed. I was able to pick him up the next day, but it took him a week to fully bounce back. Thankfully I have pet insurance but I had a £1500 vet bill I had to pay before I could claim it back. 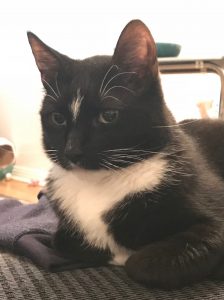 The annoying thing is that my cats are house cats – so I know it was something that he ate in the house. I felt so guilty.  It was a small thin piece of plastic, which looked like it came from some sort of packaging. The other thing though is that he is a very loved pet and I was able to get him treatment straight away. There are stories in the news on a regular basis of animals in the wild (on land and in the sea) who ingest plastic and have slow, painful (and unnecessary) deaths. To be honest it breaks my heart a little. Plastic also has other horrible effects on the environment.  It also takes hundreds of years to break down so a lot of the plastic ever made is still in existence. Plastic also contains horrible toxins which are bad for the environment as well as us! Since then, I have become a lot more aware of single use plastic and try to avoid it where possible – but you can’t avoid it all together. Trust me – I tried and I genuinely lasted about 5 minutes! Here are some of the ways I am trying to cut back/out my single use plastic use:

Like I said – I’m far from perfect and don’t manage these every time, but I assure you once you are aware of the issue you will be really surprised at how hard it is to cut down your plastic use.

Can being environmentally friendly be cost effective?

Yes! Whilst there are some things that are not, some things that are better for the planet will cost you actual money that you could be spending elsewhere .Now most of those ideas above actually are actually more cost effective in the long run for you, but  some aren’t. Some will involve you making a conscious effort to decide what your priorities are. Some of these include:

The good news is though, the big companies are realising where consumers and customers’ priorities are and these prices are falling. For example, using a green energy company doesn’t mean you have to spend a fortune on your bills like you once had to. When I looked at switching my energy, not only were Bulb cheaper than other providers, but they are green too! It’s time we smashed these preconceived ideas and continue to make sure the shift in making being environmentally friendly more affordable continues!

The other good news is that there are so many other ways you can be frugal and save money elsewhere that you CAN be environmentally and not break the bank.

Some of my other ways of combining the two are:

Some things I’ve mentioned will incur charges over and above what you normally pay, but there are loads of ways of being environmentally friendly which have minimal costs. I am not going to preach – only you can decide what you can afford and what changes to your lifestyle are going to work for you, but I hope this has given you some ideas to the possibilities and options that might be open to you, as well as all the other advantages of going green!

You can also ask your energy provider for a free of charge smart meter – this will help you monitor your usage which can help the environment and your wallet! 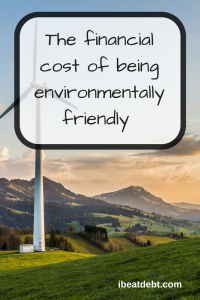